What's in a Name? Linville Knows...

Welcome to Linville, North Carolina; a small point on the map tucked away high in the Blue Ridge Mountains. As the natural beauty of the area began to attract more tourists than mine workers, the local inn - which would later become the Eseeola Lodge - built a nine-hole golf course in the early to mid-1890s before adding five more around the turn of the century. Donald Ross showed up in 1924 and laid out the existing 18-hole course a couple blocks down the street. The rest was, as they say, history.

Linville is home to some of the best mountain courses ever built, including Ellis Maples' Grandfather G&CC

That history has lead to the creation of nearly twenty courses over the years, drawing a whose who of golf course design. Names like Ross, Raynor, Banks, Byrd, Cobb, Fazio, Maples, Nicklaus, Palmer, Trevino and Weed have all left their fingerprints on the Linville area.

Without question, the Linville name carries a ton of weight. Stands reason why four courses use it in their name. Let's breakdown what's in the name for each of the four...

As discussed above, you've got to back to the one that started it all. Since there is no one still alive today that would have played the 1892 layout, pardon us if we just go ahead and begin with the existing Donald Ross mountain masterpiece.

This course is old world overload - and it is incredible. Because it was built by mule and pan, it has so much character every where you look. And in case you were wondering, yes, the Ross turtle-back greens are just as difficult as you'd expect to find in a work that is as close to an original - or at least the spirit of it - as you'll find anywhere.

Most mountain courses built in the golf cart era have taken advantage of that mobility and have been able to spread their courses out over hundreds more acres than the walking-style courses of the Golden Age. This course is certainly the latter - especially when it comes to the short green to tee walks.

Not that we walked the course, but just the fact that you could makes us want to come back and do it one day.

There are some great golf holes at Linville, but most conversations start with the par-4 third hole. This bunker-less brute is found in nearly every 'best holes' compilation every published. Trying to describe it is like would be akin to a high school art student trying to write a paper to explain a Picasso, so here.... just look for yourself - tee to green.

Linville Golf Club appears on nearly every 'best courses you can play' list, though you do have to stay at the Eseeola Lodge to gain access to the otherwise private club. The accommodations there should be up to your liking, but don't expect a Groupon offer to show up anytime soon. It's a great weekend getaway and has a full service spa in addition to tennis, food and all the free fresh air you can breathe in.

Celebrating their 50th anniversary in 2019, Land Harbor came along next in the line of 'Linville' courses. Originally a nine-hole course designed by Tom Jackson, this semi-private club added a second nine opened in 1982. The front nine (original nine) rolls up and down the slopes between trees and an artsy housing development.

We'll say the course was designed as a nine-holer for a reason! The back nine is three things: short, targety and dogleggy. True, the more you read that sentence, the more it appears we bastardize the English language. Thankfully, golf has its own language!

The furthest shot you can hit in any one direction on the back side is about 180 yards - and that's your opening tee shot on number ten! There were even a couple par fours that played wedge-wedge.

Had the course been built in today's age where the number of holes a course has is becoming less traditional (no longer in multiples of nine). The back could play as perhaps a baker's dozen unique par threes with a par four thrown in instead of a 3/6 split on par 3s/4s.

It is open to the public, making it is one of the few golf options in the High Country if you're not a member at one of the higher end clubs. It'd be fun to spin at least the front nine. It has some charm and even has two telescopes to sight groups over the hill on a couple tee shots.

Right after the back nine at Land Harbor opened for play, Linville Ridge Golf Club brought the region's golf to new heights. Originally designed by George Cobb (1983), 'The Ridge' plays 'UP' to its name. While most of the area's courses play in the valleys around 3000'-3500' in elevation, Linville Ridge rises up to nearly 5000 feet above sea level. In fact, the course holds the designation for being the highest in elevation east of the Mississippi River.

Simply put, instead of playing in the shadow of Grandfather Mountain, Linville Ridge rises up and shakes hands with the old man! The vistas here are unmatched in the immediate area and are among the best throughout the Appalachians.

Bobby Weed refreshed the course in 2007, reshaping the bunkers in a rough-hewn style that fits in line with the rugged landscape. The results were absolutely breathtaking. See for yourself how the property comes alive with an aggressive look to match the terrain it follows.

A quick visit to Weed's website uncovered perhaps the best description one could possibly give for this course...

As much fun as this course is, it all builds towards the show-stopper; the signature par-3 sixteenth hole. Let us first agree on something... If in the unwritten rules of mountain golf, there is not an amendment that clearly states that in order to officially call yourself a true mountain course, the course must come with a 'fall off the world' par-3, then we'd like to propose that one be added to said imaginary rule book. Now that we're all in agreement, this hole drops eleven stories from tee to green. Its not the furthest drop ever - but the backdrop can drop your jaw just as far!

Playing Linville Ridge's 16th on a cloudy day would be like being told you can't unwrap your gifts on Christmas Morning!

Linville Ridge is a private club within a gated community, but national memberships are available. If you're a frequent visitor (with or) without your own place in town, we'd HIGHLY recommend looking at LRGC to see if there is a fit for any of its ten different membership classes.

The most recent course to join the Linville Fraternity is Linville Falls Golf Club. Opened in 1995 under the name Blue Ridge Country Club, the course has had its ups and down (and different names) through the years, including a two-and-a-half year shutdown due to catastrophic flooding from back-to-back hurricanes.

However, based on recent social media fodder, the course appears to be on solid footing.

Linville Falls was designed by Lee Trevino (with a nod to Bruce Devlin) and is a joy to play as it runs out and back through a river valley. There are great views and some very interesting shots that you'll remember long after you're gone (so long as you have pictures to remember them!).

The course actually has a town of Marion mailing address. It appears that former owners were attempting to capitalize on the brand value of the Linville name, it doesn't mean the course can't hold its own against its big brothers up the road.

This was actually the first of the fraternity that we played, so we're about due for a return trip. Based on what you see during an early season round (at the the then-named Linville Falls Mountain Club back in 2011), we're anxious to see what it might play like these days! It's open to the public - so let us know if you're going, we'll meet you there!

The Linville area is home to no less than six of the top 100 courses in the state according to the NC Golf Panel, but should probably contain at least one more. [Editor's note: That list is a bit incomplete and skewed towards classic courses since it does not mention Diamond Creek (consensus top 10 course in state by just about every other publication) or Tobacco Road. The fact that Southern Pines Golf Club ranked TEN SPOTS AHEAD of Tobacco Road in the Top 50 You Can Play list says you might need a bit more diversity on your panel. Nothing against Southern Pines, but come on guys...]

In other words, put it on your list of playing destinations.

If you don't book a stay at the Eseeola - which we'd recommend doing at least once so you can enjoy the spoils of luxury and of course their fantastic golf asset - there are dozens of Airbnb/Vrbo options in the region at ski and summer destinations like Sugar Mountain and Beech Mountain. Nearby towns of Boone and Blowing Rock are also great places to stay with plenty of charm and things to explore (shopping, dining, hiking, equestrian, college football at Appalachian State, etc).

Enjoy more of the best from the Linville foursome of courses... 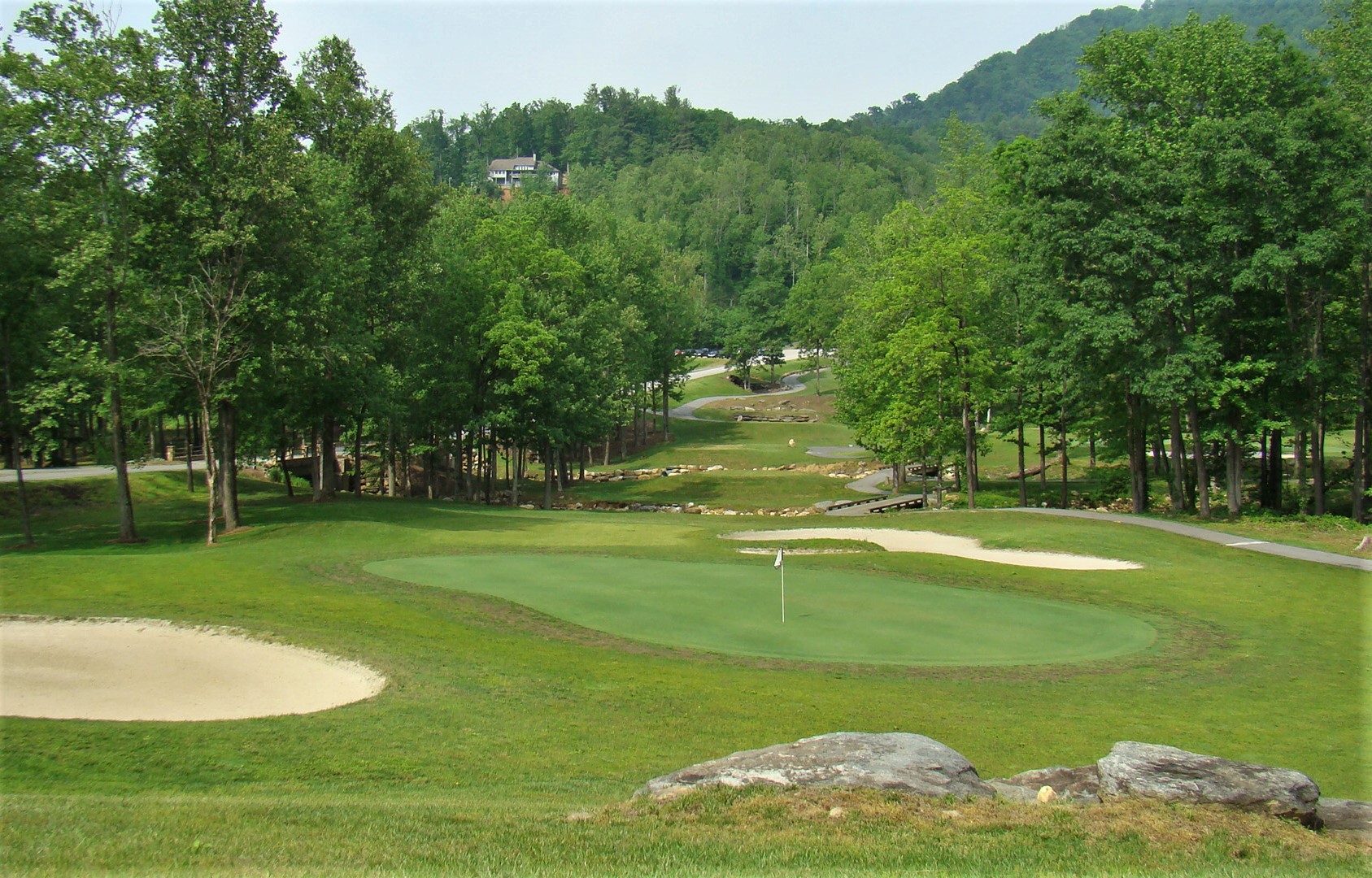