In one of the prettiest small towns in the southern string of the Appalachians, you'll find a quiet river valley adorned with a Jack Nicklaus signature course that fits as perfectly into its surrounds as it does into the charm of the neighboring village. And when we say charming, we mean it in the best sense for both entities.

WINTER GOLF NOTICE - If you want to play 1000 courses, you play in the winter. Don't judge a course by it's winter photos and dormant Bermuda grass!

Normally when we're playing out of town, we'll have at least a few weeks to research the area or talk to some folks we trust on the ol' Instagram. Rarely does the trip happen where golf is an afterthought, but such was the case here. Thanks to the perfect storm of 60+ degree temps the first weekend in January, an uncle itching to get back on the golf horse (Thanks Kev!), a cousin (Thanks Jammie!) with a friend (Thanks Wes!) who just happened to join the only club in town close enough to make it work time-wise, Winter Storm Achasta was born!

Or this might have just been the perfect instance of having a golf website for which to fill content to convince my better-half that this was a worthy venture (Thanks Boo)!

Either way, you don't look a gift course in the mouth - especially in January!

As mentioned above, Achasta sits in a quiet river valley perfectly sized for an 18-hole championship course. The Chestatee River cuts pretty straight through the property, but evenly distributed so that about half the holes play either along side or over water.

The course is gated, but it was nice that it didn't hit you in the face right as you turned in. It was actually on the opposite side of the valley, so it allows folks just wanting a peek at it to do so since you drive right through the middle of the course.

If you aren't a fan of bridges, don't worry, they're sturdy but you will be on them - a lot.

Aside from a lucky few residents on the hillsides and a few condos near the clubhouse, the course is virtually devoid of homes - and it is glorious. Since we'd had so much rain the night before, we had the entire course to ourselves save for a couple folks getting some swings in on the range.

It's the combination of the modest hills, flowing water and pings of pings echoing through the expansive setting that gives full pleasure to the player. That said, the entire place wont play more than 20 feet up or down the whole day.

Since the course plays so flat and can stretch out over 7000 yards, it is a popular qualifier site for many tours and tournaments. It also hosted the Georgia High School Championship tournament, so you're going to get a pretty good test. However, since its a mostly member and resort play facility, it's not overly hard if you know where to throw it.

In fact, I managed to shoot even par on the back. I'll tell you how later.

The course has a great hole-by-hole tour on their website - with images pulled from the GPS system the carts employ. You can check out that tour here.

Having played many of Jack's courses, this was the first one I'd played that didn't feature at least a little undulation in the property (NOTE: While Harbour Town was technically a Jack/Pete Dye collaboration originally, most folks - us included - think of it as a Dye course). I kept waiting for the course to creep up the slopes in the pinch at the end of the valley, but it never came. Instead, the highest points on this course are on one of the many - and very expensive - bridges that cross the Chestatee River.

I'm not an engineer nor a contractor, but there has got to be a million dollars tied up in the steel arches. There are four of the massive spans for golf carts alone, then two more for cars - one with a tunnel for carts to pass through after the first and third holes - that bring more than just a means of transportation to the day.

The 4th and 5th greens (the entire 5th hole actually) play on an island in the middle of the river. You should be able to score a bit if you're warmed up thanks to a short par four 2nd and moderate par three 3rd immediately before the manageable par five 4th. Got all that?

Among my favorite #Jackholes on each Nicklaus design are the par threes. Each course we've visited of his (or Jack II's too for that matter) have featured multiple, memorable par threes. Achasta is no different. They are the clear show stoppers here. Cooler still are the two one-shotters on the backside that play as numbers eleven and seventeen, but whose greens are neighbors as the course winds back upon itself to close the loop.

Here are two shots of each par three, first playing in then behind the greens 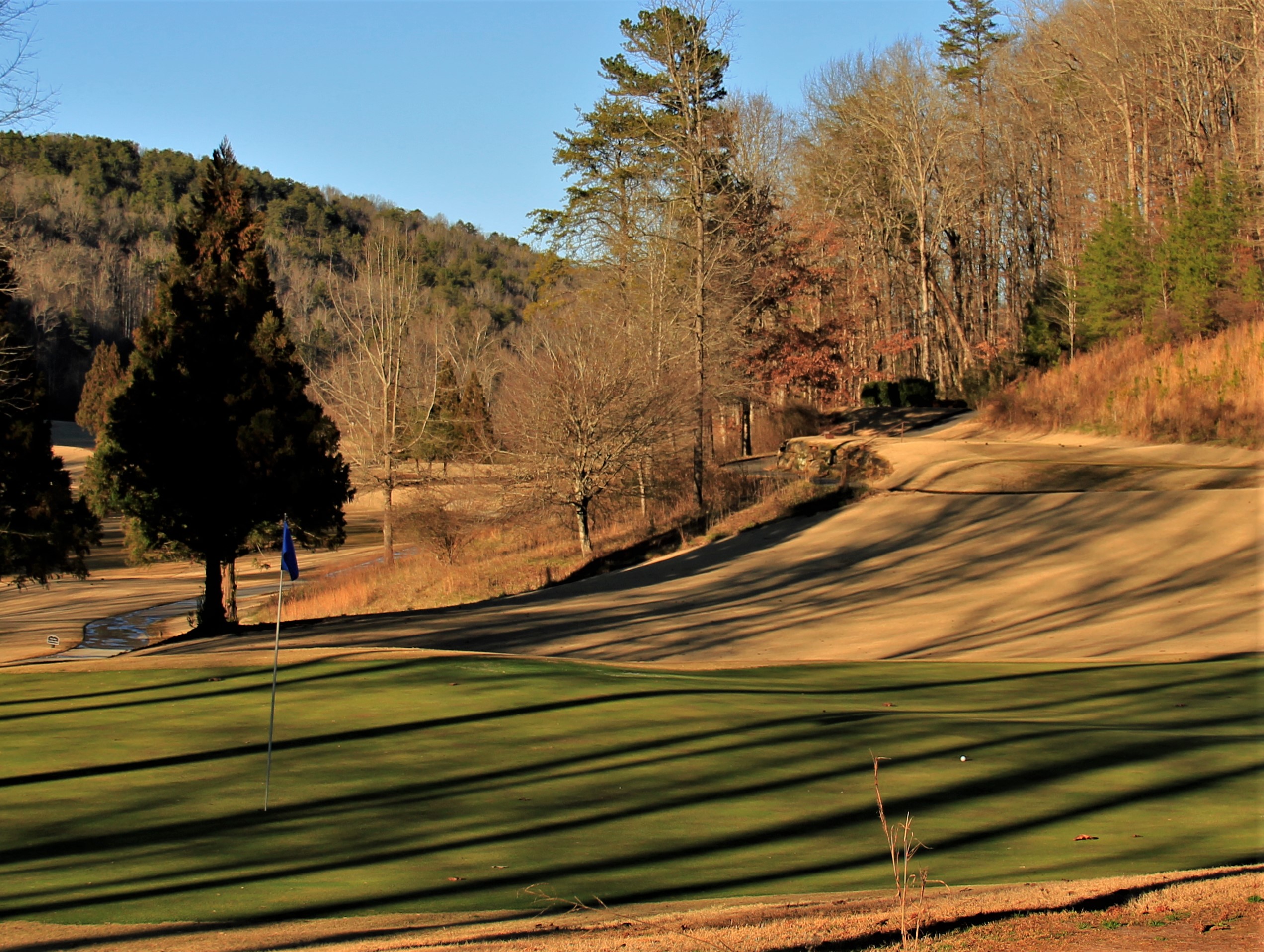 Ok, so earlier I said that I shot even par on the back and that I'd provide tips on how to do it yourself. Here's how you do it:

Schedule a 2pm tee time in January when the sun sets early. Play the front nine then play 10, 11, 17 and 18 coming back in. So yeah, it was only over four holes. Sue me. Probably happens for BMAC all the time, but not for this guy! I'm counting it. It was also completed by chipping in on 18 after sending my tee ball in the water, which made it that much more memorable.

You can't help but feel a little bad when your playing partner chips one inside a foot - then you chip it in on top!

This is a really fun course. We certainly can't hold the rain against them - but for a river valley setting the course drained exceptionally well. Would love to play some winter golf in our region with some overseeded fairways, but it just doesn't seem to be in the budgets for the courses in the southern Appalachians. None of that will change our opinions - the people, the town and the course are some of the best you'll come across.

If you're visiting Atlanta, Dahlonega is worth a 60-minute drive and a daytrip. Play a round then head into the downtown square to check out one of their amazing restaurants, learn about the Dahlonega gold rush or take a horse-drawn carriage ride at Christmas time. It's like a scene straight out of Charles Dickens' works!

Bonus Sights! The University of North Georgia is just a stone's throw away from downtown. It is one of the handful of civilian and military colleges in America. If you're lucky, you might be on the drillfield when they retire the colors for the day.